Hookup sex story: Hello everyone my name is Paikhomba; born and raised in the beautiful state of Manipur. I’m 30, already passed my quarter-life crisis, 6’4, quite fit and muscular; presently working in a bank in Australia, identify myself as GAY. I already have quite a fair share of “relations” in my life, although it was mainly about lust than love.

Well welcome to my journey. This is a series and I plan to share each and every detail of my sexual journey so far. So Enjoy.

The 12th results are out now. Being the nerd I was I passed the exam with pretty decent marks. As I got selected for the training, I worked out a lot; got myself fit and ready for the hell I was about to go through. And ever since my eighteenth birthday, I’m like addicted to the portal that I mentioned.

It’s not like I met up with every being with a dick, it’s just that I liked talking with the guys on the portal. On top of that, I’m quite picky with guys. So it was hard to find guys that I really liked.

Weeks after meeting Dinesh through the portal, I talked with this guy. He was from Senapati, another part of Manipur. I had a very fun time talking with him; we really hit it off. I was quite scared to meet random people as I was super anxious around new people and as most of you might know, guys on the portal or other dating apps now, they doesn’t always turn out to be what they say.

But for some reason I felt comfortable talking with him. I was looking for just hook-ups as I was leaving hometown in a few months and I was not really looking for a relationship, and thankfully so was he. After few weeks of talking we decided to meet up at a hotel as both of us couldn’t provide a place that we could have fun.

A few seconds after I rang the bell, he opened. Dressed in faded grey shirt, Joe stood 6’2, quite taller than me (I wasn’t 6’4 then, I was around 6’); which I didn’t mind at all. But he was way buffer than me; he has humongous biceps all the way to his forearms. He flashed a huge grin.

“Hey man! You must be Paikhomba.” He exclaimed. Without warning, he reached over and embraced me in a bear hug, his rocklike chest pressing tightly against my less muscular body. I returned the hug, giving him a few bumbling pats on his left shoulder. Joe probably sensed my awkwardness and retracted.

As we stood facing each other, I could now get a good look at my partner. He was strikingly handsome, with large almond eyes and an angular bone structure, topped with a neat crew cut. He was 23, Naga and was in college when I met him.

I stepped into the room, the smell of him hitting me instantly. So masculine, soapy clean from the shower with a hint of light cologne. But I could still smell HIM.

I held out some snacks that I bought on the way as he started to close the door. “I wasn’t sure what to bring, and my mom always said never go empty handed to…”

I was interrupted by his kiss. As soon as the door was closed, he moved to me, grabbing me not forcefully but with a fierce passion and pulled my head into his where his lips met mine. His tongue opened my mouth, and forced its way in, where I hungrily accepted it, meeting it with my own.

I saw stars, felt a rush of emotions flooding me as we kissed in the hallway. I grabbed the back of his neck with one hand and held on as we made out. I never wanted to stop kissing him.

He finally pulled me back, his two hands holding both sides of my cheeks. “Sorry,” he said quietly, “I couldn’t help myself. I’ve been thinking about this very moment all afternoon.”

I put my free hand on his and looked into his soulful eyes, “Me too. I haven’t stopped thinking about you.” I stared up into him. “Bro!” I added with a half-smile.

He literally growled and took the snacks from my hand and strode into the room, telling me to follow him. I watched his big round ass move as I did, eyeing his meaty calves, entering the room.

I could see the bulge in his shorts. How could you not?! His shorts were so form fitting that it wasn’t hard to miss. Staring at his shorts, I can’t help but wonder how big it can be. I moved in front of him, slipping my hands around his waist. His hands came down to my shoulders, feeling them, before slipping down the sides of my arms.

I looked up at him, as he looked down at me. My hands moved up his big back, feeling the rock hard musculature of it, before moving back down to his hard ass. As my hands roamed over his round butt, he breathed in deep, and bent down to pull me closer to his chest and kiss me again.

This time the kiss was slow, his lips barely meeting mine before we both parted our lips, waiting. Our noses touched, and he leaned his forehead on mine, before moving his lips back to mine to kiss me lightly. And then lightly again.

Then his tongue came out as did mine and they met, touching softly at first, before mine slipped into his mouth. He did the same and we were locked in a deep kiss, our arms wrapped around each other tight.

“Fuck,” he moaned. “I can’t wait.” He scooped me up easily in his arms, lifting me up under my pits to bring me level to his face as we kissed again. He held me there, his arms wrapped around my upper body holding me without any effort. My legs wrapped around his waist as we continued to kiss deep, our passion building.

I was squeezing so tight against him, as if I could simply bury myself into his big hard body. He felt like a huge piece of granite, every muscle on his body hard. “Grab the snacks.” He moaned and turned me around so I could get them.

He laughed as I bent over to pick up the bags, now not even hanging on to him at all except for my legs pinned around him. He was holding me up by my ass cheeks and he started walking out of the kitchen.

“Show off,” I giggled as he moved effortlessly down the hallway, kissing my neck along the way, grunting into me.

He stepped into the bedroom and moved to the queen bed in the middle of the room. He stopped at the end of the bed to kiss me again deep, hard. And then he tossed me out of his arms onto the bed as if I was a sack of potatoes. I bounced backwards, surprised by his sudden dislodging of me, and watched him kneel onto the bed and crawl toward me.

Fuck this man was sexy as hell. I could see the look in his eye. He must have seen the same look in mine as we connected again on his bed, mouth to mouth in a deep lustful kiss.

As he was above me, I started unbuttoning his shirt. I needed to get this giant naked. I needed to feel his massive body all over mine. As I reached the last button, he sat back and I watched him peel his shirt off him, yanking it at the sleeves to free his muscular arms.

What a sight to see. His massive pecs stood out proud, lightly hairy across them making them look so manly and beefy. He had a small trail of dark hair from the middle of the bottom of his pecs down his flat six pack abs. He looked like a marble statue in front of me.

His shoulders were massive and round, his traps large and pronounced as he whipped his shirt off, his biceps about twenty inches of rock hard muscle. I was shocked literally; I didn’t expect him to be like this. Most college dudes around here doesn’t usually look like this as at that time people were not that health conscious.

“My God” I whispered as my hands went up to both his pecs and squeezed, feeling his skin and the meat beneath my fingers. He dove into me again for a kiss as his chest pressed against mine.

My hands went to his ass in his shorts as my legs widened and wrapped around him. I could feel his entire weight on me, crushing me but at the same time intoxicating as I felt this mammoth man surrounding me.

He pulled me up as he sat backwards, yanking my shirt from the bottom up over my head, then pushed me down and went for my flat stomach, his tongue coming out to kiss my belly button and lick my abs up to my pecs.

I looked down at this behemoth as he moved his way up my chest, our eyes locking, his mouth turning into a wide sexy smile, before he changed direction and went back down to my shorts, grabbing at the button and zipper, and then pulling them down my legs with ease. Fuck he was strong.

His big paw went to my Calvin Klein covered crotch, feeling my 8 inches already hard. “Mmmm,” he moaned, “what have we here?” He dug his fingers into my underwear and pulled them up, and then down over my cock. He looked at my uncut 8 inches, all shaved at full mast. “Holy shit.” He muttered. “What a big cock you have.”

He gave me that sexy smile again and moved down to kiss the tip. His tongue came out and I watched him lick my shaft from top to bottom, burying his nose into my big balls, and tonguing them as he slowly moved back up my shaft. He grabbed it with one hand and then drove onto it, swallowing me whole in one movement.

I gasped at the warm sensation and placed both my hands on his big shoulders, as this giant of a man, all masculine and beefy, started sucking my cock like an expert.

My hands roamed over what I could reach on him – his shoulders, his neck, his hair – while he continued to suck my cock. I assumed he was a top man, but boy could he suck a cock. His arm stretched out and roamed up my chest, and my own hands followed his shoulders, travelling down over his enormous biceps to his thick forearms, right down to his hands.

As my hands reached his on my chest, his fingers laced with mine, and we gripped each other, holding hands as my cock continued to be sucked. 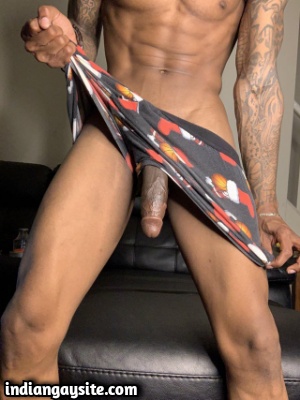 Read the hot and sexy gay teacher student story of how the hot PE teacher fucked a twink's ass hard and deep in the hostel!

Desi Gay story – A Story of a Broken Relationship