Friends fucking story: Hope you all have liked the first two parts of the story and I thank you for some of the comments and emails received on those. The story goes on further…

Rajesh and Shashvat had great fun at the hotel throughout the night. They skipped the breakfast in the dining area and simply asked the reception to send sumptuous amounts to their room. They we’re both lazy to get dressed and step out of their bed; but also very hungry from the whole active night.

After a quickie session of 69, Rajesh bathed too and they checked out and started their ride back to Indore. Rajesh drove and just like the other day, Shashvat kept his hands on his thighs while occupying the pillion seat; but this time more firmly and confidently.

He kept teasing him often by rubbing his dick and Rajesh would suddenly slow down the bike. Shashvat would give a hearty laugh from the back seat and pull out his hands immediately.

For the following days, Rajesh and Shashvat caught up with many quickies in the evenings. Rajesh would wrap up his work by 7:30-8pm and ping Shashvat to come over. Rajesh would play some music on his laptop so their delicate moans would not go downstairs to his parents.

Before getting into the bed, he would make it certain to draw the curtains and close the windows so no additional neighbours got a free entertainment show and Shashvat would laugh at this act very heartily.

The two would also go for a run early morning, before it even dawned. They would run and then head to a secluded spot, which was away from the main road, in the nearby bushes which Shashvat had found safe after a long search.

Rajesh would say, “Can’t we just go to my home and have a nice satisfying sex on my bed? Ye itna detective banke aisi jagah kyu dhoondhi hai tumne?”

They would do some stretching exercises on the ground and get to their usual business.

Rajesh would log on to his office work and Shashvat would go back to killing time with his grandparents till Rajesh pinged him again at around 7:30-8pm.

One fine morning when Rajesh was in his bathroom bathing, he heard the timid sound of the doorbell. Minutes later his mom came knocking on the door; “Are Rajesh beta! Jaldi aao, tumhare liye surprise hai.”

Rajesh hurried a bit, got dressed and started coming downstairs when he heard his parents and a familiar sound chatting and laughing out merrily in the living room.

He found the voice very much familiar but could not really understand and believe himself when he reached the living room to see the man who was sitting and chatting with his parents.

While Rajesh was still in a shock, his dad said; “Are Rajesh wahi kyu khade ho? Dekho ye Amit aaya hai…. What a pleasant surprise he has given us.”

Rajesh’s face dawned up a sudden smile seeing the handsome​ persona of Amit in his living room. He was wearing a skin-tight jeans and a neatly buttoned leather jacket. Amit kept down his Ray Ban sunglasses and got up with a vibrant smile that put a dimple on his right cheek.

He came up instantly and gave a tight hug to Rajesh. Rajesh reciprocated with an equally warm hug and said “I am really surprised since you came suddenly like this.” Amit laughed, “Dumbo! That’s how surprises work.” They all sat for a while chatting and Amit informed that he had come to invite them for his wedding which was in next month.

He gave them the invitation card and Rajesh’s mother went in the kitchen to quickly make some kheer. Rajesh said, “I will just email my team that i am taking a day off today.”

Amit was a year old senior to Rajesh in his engineering college at Delhi and his roommate for first year. To avoid ragging and keep a good bonding in seniors and juniors, the hostel paired students of different classes.

Amit was a Mechanical Engineer unlike Rajesh who was in Computers. Rajesh recalled all the days how he had helped him in his studies; especially maths, guided him in various exams, preped him for aptitude and interviews and in campus placements too.

Amit was in touch with him later too though he had joined a job in Chennai. They both used to hit the gym together with many other friends, arranged various camps, technical competitions, sport-day events, cultural events, treks and outings.

He had visited Indore before too and met Rajesh’s parents. All in all, Amit had been a very good friend and a mentor to Rajesh in his crucial years of life.

Rajesh emailed his colleagues about his leave plan citing a fake reason of illness. Rajesh said, “Chalo… Kheer khane chalte hai!” and he shut down his laptop.

Amit caught Rajesh from behind pulling him close and whispering in his ear, “Sirf kheer se mera kya hoga?” and he licked his ear lobe passionately gripping and tightening his hug.

Rajesh turned around swiftly and gifted him a French kiss not loosening his grip at all. After all, Amit was Rajesh’s FIRST LOVER.

Post lunch with the family, the two came back to the den where they could no longer resist each other anymore. Rajesh had been naughty during the lunch tickling and enticing Amit with his toes; and also reaching up to his crotch at one occasion to find a boner growing up.

Now back in the bed, Rajesh was rubbing that boner softly and pressing it hard while their lips were locked up smooching and sharing the wetness. 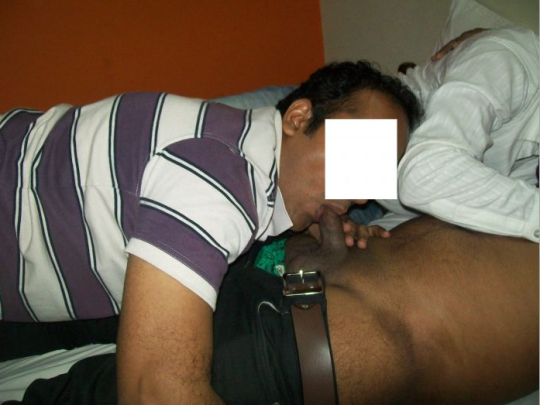 Read the hot and wild Indian gay sex story of a young desi having a fun and wild time with his friend Abid and his family! 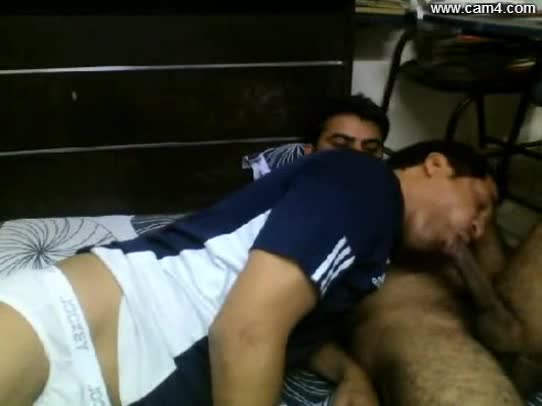 Hello my dear Indian Gay site lovers out there, its been long time since I posted my last story here at Indian Gay site, I'm Harsh, 5.11 tallness, Bicurious

Desi Gay Sex Story: Picking up a guy in train

Two days of intense fucking by the landlord Part-3

Three of the guys stayed behind and they pushed my head down and pulled down my panty revealing my soft ass. They immediately took turns fucking me while the landlord and the plumbers enjoyed the show